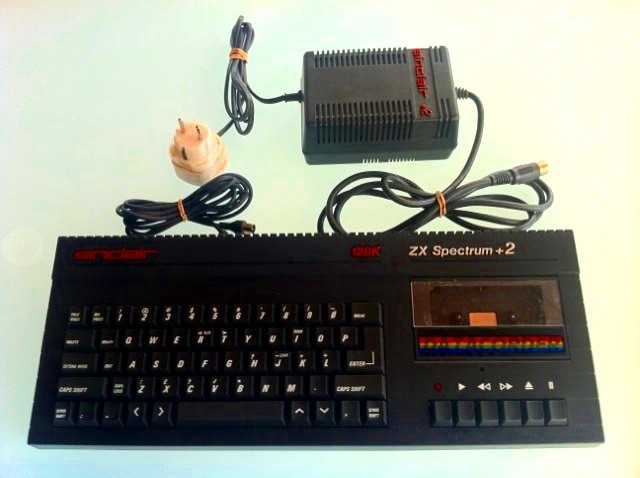 The Spectrum +2A with built in tape recorder is the last produced computer in the Spectrum production line.

After purchasing the Spectrum range from Sinclair, Amstrad supplied the market with the +3 Spectrum and its built in 3" disk drive. But later Amstrad decided to release also a cheaper version without disk drive, but therefore with built in tape. This was the birth of the Spectrum +2A (do not change with the former grey Spectrum +2).

So the +2A is very similar to the +3. It has a real good power supply, producing the needed different voltages outside of the Spectrum and so avoid internal heating.

Known from the previous versions are also the built in Joystick-ports (Sinclair standard, need converters to use with normal Commodore/Atari Joysticks), the sound output, keypad and Midi-Port and also the RGB-monitor socket. Since the Spectrum 128 are 128 Kilobyte standard memory size for Spectrums, as well as the AY-Soundchip with 3 channels. The whole computer is in a good black case with real keyboard and built in tape recorder.

With this concept Amstrad was again sucsessfull and made a real Spectrum boom again which lasted till the early 90s. Who only knows the 48k Spectrum will be surprised by the big difference.

The computer is in very good cosmetic condition and of course tested and working. The machine comes complete with all cables and power supply, but no manual or software. Both are available in the internet, for example WORLD OF SPECTRUM.

– No feedback has been given for Sinclair ZX Spectrum +2A. –
Rate item