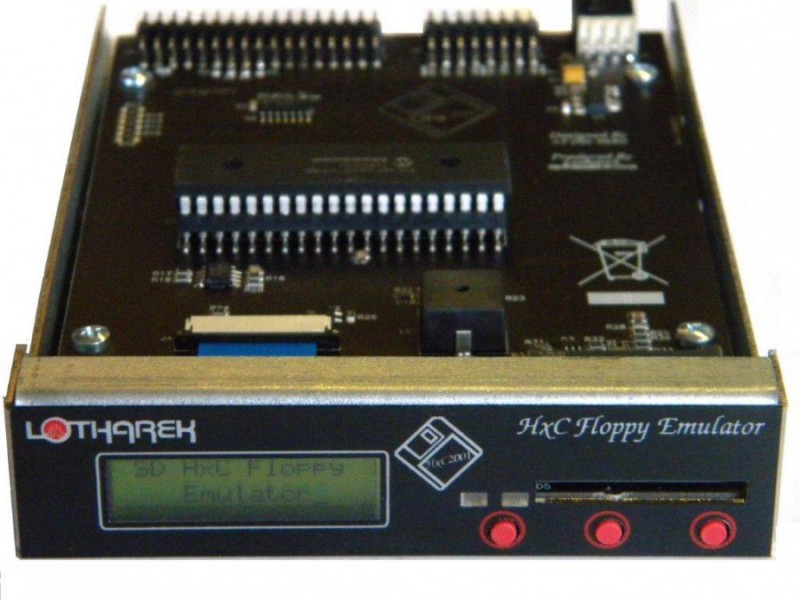 Floppy disk drives for some systems are gotten more with difficulty to and disks themselves ever more expensively. For many systems there are already solutions with non removable disk or CF-maps. But around a completely new operating system to use it would not be nevertheless beautiful, one could a SD-map re-design you like a floppy disk drive is addressed. One would know nevertheless even on a large SD - map a great many disks placings

Enough dreamed, exact this HxC makes for floppy emulator! To escape in the industry such emulators already longer used over defective drive assemblies, have now we the whole also for the domestic purposes. By means of PC one puts disk images to which one then on SD - map copies.

This SD-map then into the HxC floppy emulator insert and the equipment like a normal floppy one to your computer attach. By means of push of a button you select the image from you to play want (the images to designate like a disk, f.e. plays 1, plays 2, plays 3 etc.) and already can one disks change without really much to move. A whole collection of 100 disks one can bring on a SD-map, theoretically even to more, depending upon size of the SD - map. Possible the HxC floppy emulator is to be attached only as the first or second drive assembly, so that one has still an original drive assembly in the enterprise. In addition, possible 2 drive assemblies are to be emulated. The whole became gesture constant among other things on PC, Atari ST, Amiga, Amstrad CPC, Thomson, MSX and ZX Spectrum. One can do quasi 5 1/4, 3.5 or also Amstrads rare 3" Drive assemblies emulate, make no difference. Particularly with the ZX Spectrum gave it several floppy formats. Here according to standard +3 is already integrated, other formats however possible in the PC software +D and. One must only then the diskette data know and can its own format again create oneself. Thus theoretically also every other emulation is possible, but evenly not by mouse clickable. In most systems (also 3") the emulator without problems should be applicable. It has exactly the size of a normal 3,5" drive. So it should easily fit in most systems. The LCD and buttons are at the front, the case is black. If you need another size for internal use or another colour, please contact us.

– No feedback has been given for Newest version: HxC SD Floppy Emulator Rev. F in black case. –
Rate item 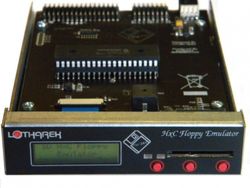