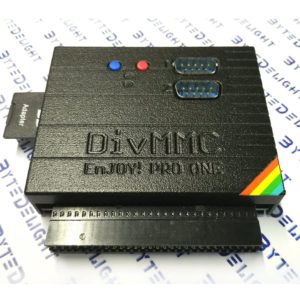 DivMMC  is based on the known DIVIDE and is a logical development of the ATA (IDE) interface.  This new version of the Divide contains a SD card slot is fitted directly to the interface. The SD card and CF card has become widespread as a storage medium in Divide, so no IDE port is present on the interface anymore.

The DivMMC comes with instructions and prepared SD card (8GB) with software. Further Spectrum programs you can easily download from various websites and save on the SD card, these programs can then be accessed by pressing a button on the Spectrum.

Further features which were specially included in the DivMMC:

Those looking for an easy way to play fast Spectrum software from the Internet on the original hardware, will welcome the DivMMC. The operating system is still evolving, new features are easy to update.

There are more operating systems that can be installed and enhance the interface even more. There is already a community on the net.

If you have further questions, we surely can answer them.

– No feedback has been given for DivMMC Enjoy! Pro One Interface ZX Spectrum SD Interface with SD-Card. –
Rate item 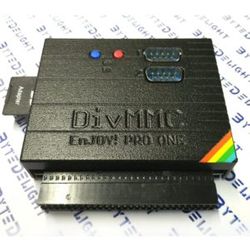